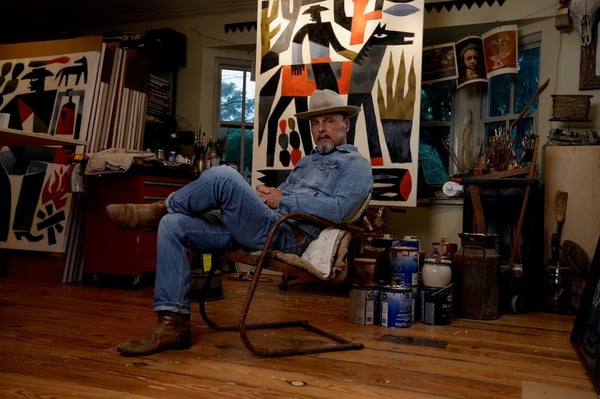 Even then, he felt the spark. Kansas born, Texas bred artist Jon Flaming says that at the age of five he met his artistic match, a fellow preschool-age artist whose early mastery of drawing inspired Flaming as he grew ever more obsessed with his craft. “There was this little kid who sat next to me in Sunday school, and he would draw these awesome jet airplanes,” Flaming recalls. “I wanted to draw jet airplanes as well as that kid. I've been trying ever since to draw that jet airplane.”

Jets aside, coming from a ranching culture, it was the iconography of the American West that eventually became ingrained in this artist’s aesthetic. Cowboy shows like Fury, The Rifleman and The Lone Ranger formed his early impressions of Western archetypes. From playing cowboys-and-Indians with toy rifles and bows and arrows, Flaming now plays out these scenes on canvas with brush, oil and turpentine.

His work operates as a love letter to his adopted home state, as well as a statement of independence. Opposite to the realism of artists like Frederic Remington, whose works of Texas depicted a place steeped in the male stereotype, Fleming's work is unexpectedly playful, open to interpretation and without pretense. 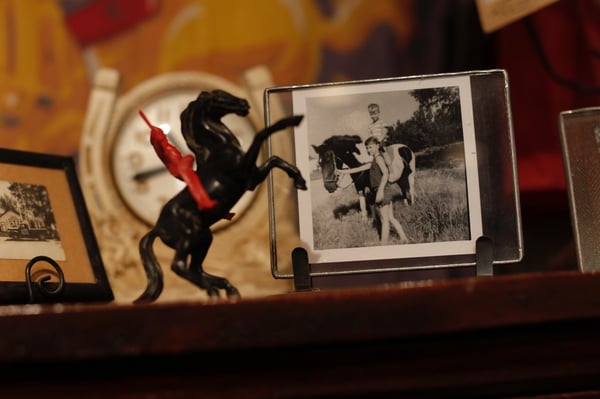 “I truly want to be distinctive stylistically,” he says. “A number of the early Texas artists were painters in the middle part of the 20th century. I was influenced by those artists, but I’m also influenced by Paul Cézanne, Paul Gauguin and even Pablo Picasso.”

“You’ll notice Cubist influences in my art—they’re very graphic,” says Flaming. “Creativity is by subtraction for me. In many of my pieces, you’ll see things boiled down to their most simplistic shapes. …It’s cowboys sitting on horses, or a cactus in the background, you can still see that. If you pushed my art two or three steps more, though, you would go toward big chunks of color that could become abstraction.”

“I’m trying to make a break with traditional Western art. I have an appreciation for the Western artist, but it all starts to look the same. I want to set my work apart and do something that, in my mind, is Texas art but is very distinct from the cliché Western art look.”

Flaming is also a graphic designer, working with corporate clients such as American Airlines, Dell, FedEx, Frito-Lay and Neiman Marcus. His art and design practices inform each other. In fact, this artist uses modern technology to create his color studies for paintings depicting ranch hands, historic dance halls and the shades of the Texas sun. 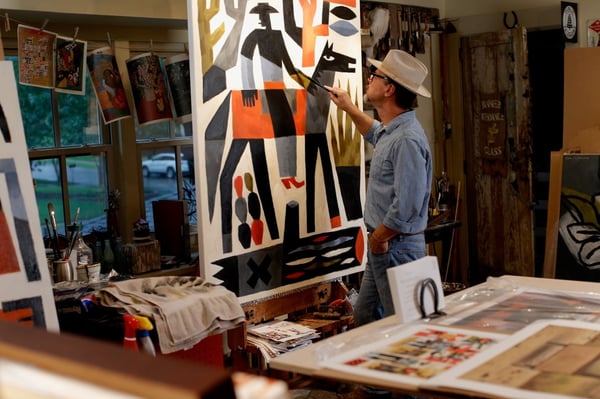 “If you rewind the tape and introduce Picasso to a computer, I have a feeling he would take advantage of the technology to create color studies, too,” Flaming asserts. “I’ll spend half a day at my computer and when I’m done I’ll pick up a brush and squeeze out paint.”

Whether or not his forebears would have taken to tech will remain a mystery, but it’s a fact that Flaming’s distinctive style has earned his work placement in permanent collections including the Grace Museum in Abilene, the Tyler Museum of Art and the San Angelo Museum of Fine Arts, as well as many prestigious private collections. But he hasn’t done it alone.

Flaming points to the artistic connections he’s made in Dallas, as well as the city’s strong collector base and internationally recognized galleries, as anchors for himself and other artists who call Dallas home. He has personally been represented by David Dike Fine Art for over 23 years, an example of how the vibrant artistic community in North Texas allows for creative freedom while giving artists financial security.

“Dallas has been a great place for me and my family,” he says. “I am very proud to be a part of this community. My friends, collectors and supporters here continue to encourage me in my artistic pursuits. Dallas has been very generous to me, and has allowed me to pursue my art through the ongoing patronage of numerous local collectors and individuals who have financially supported my work over many years.”

"I love Texas. It's such a big, crazy, diverse and beautiful state. As an artist, I could spend 20 lifetimes here and not capture it all. I’m a Texas artist. I’ve given myself that title.”

With the support of his city and state, Flaming continues to push the boundaries of what Western art can be. His work is a testament to the famous Lone Star state-of-mind— proudly independent while steeped in tradition.

“My collectors are visionaries,” the artist asserts. “They see where I am, tied to the past but not locked into it.”